Practice Perfect 718
Perioperative Antibiotics in Foot & Ankle Surgery: Should We SCIP It?

As a foot and ankle surgeon, I have found multiple frustrations when it comes to perioperative medications, specifically antibiotics. Increasingly, I find myself butting heads with the requirement for preoperative antibiotics mandated by the Surgical Care Improvement Project (SCIP). This initiative, started in 2005, is well known to anyone who spends time in an operating room, and, although I agree with any effort to keep patients safe and improve outcomes, I have to ask the question - Does the perioperative prophylactic antibiotic rule makes sense in lower extremity surgery? This is actually an important question at a time when bacteria are becoming increasingly resistant to antibiotics, and some are even talking about a “post-antibiotic era,” a very scary prospect indeed.

Get a steady stream of all the NEW PRESENT Podiatry e-Learning by becoming our Facebook Fan. Effective e-Learning and a Colleague Network awaits you.

Given that antibiotic resistance is increased when we administer more antibiotics, it would make sense to limit antibiotics to only when they are actually necessary and effective. Let’s take a look at this project and see what evidence supports or refutes the use of perioperative antibiotics in elective foot and ankle surgery. If one examines the protocols below, it will become clear that many of them are more pertinent to other types of surgery, such as general surgical procedures. The performance measures most germane to our conversation today are numbers 1 and 2.

There are a few comments one can make about the research behind these protocols. The recommendation for antibiotic prophylaxis within an hour of incision was based on a 1989 study by Larsen and colleagues who examined non-emergency in-hospital surgeries3. They found that compliance with preoperative antibiotic timing significantly decreased infections after surgery. However, there are some methodological issues to keep in mind. First, the study excluded outpatient surgeries (an important population for the lower extremity surgeon), a factor that would skew the outcomes toward an increased postoperative infection risk. Additionally, the study included 300 types of procedures, the majority of which appear to have been urological, gynecological and general surgical, including a minority of orthopedic procedures. The bottom line is a lower generalizability from this study to foot and ankle surgery. Finally, one should keep in mind that this study did not examine whether or not to give antibiotics but rather when to give them.

SCIP protocols DO NOT state that giving antibiotics preoperatively is REQUIRED. This is an overinterpretation of the guidelines.

It is also important to note that SCIP protocols do not state that giving antibiotics preoperatively is required. This is an overinterpretation of the guidelines on the part of healthcare facilities which seems to have been forced onto surgeons even in cases where the risk of infection is very low.

Although the research evidence to answer my original question (should we routinely give preoperative antibiotics?) is relatively sparse, there are a couple of studies worth examining. Let’s first take a look at a retrospective study by Zgonis, et al4 published in 2004, where they performed a chart review of 555 patients who underwent elective foot and ankle surgery over a 6-year time period. Three-hundred and six patients (55.1%) received preoperative antibiotics while 249 (44.9%) did not. The table below shows the outcomes.

Zgonis et al found no associations between preoperative antibiotic use or patient characteristics with postoperative infections.

A more recent study by Tanigate and colleagues examined a similar question5. This study’s aim was to see if there is an optimal time to begin preoperative antibiotics in foot and ankle surgery and to determine if certain patient factors increased the risk of skin and skin structure infections. They performed a retrospective chart review of 1933 elective and nonelective foot and ankle procedures in 1632 patients over an almost 4-year period. They recorded various patient factors, including timing of antibiotic administration and examined the incidence of postoperative infections and need for incision and drainage (I&D) at 30 and 90 days postop. 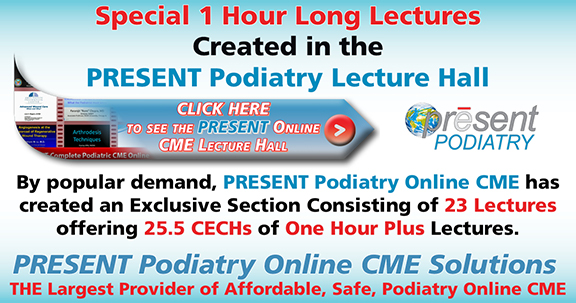 They found 17 cases (1.1%) with a postoperative wound infection with six requiring I&D. They found that longer procedures and nonambulatory surgeries were the only factors that increased the risk of postoperative infections. Again, this was a retrospective study, so we should be cautious with how we interpret the results. However, the authors found a very low incidence of postoperative infections in this larger population that also included sicker and more acute patients rather than elective procedures with a likely healthier population.

Tanigate et al found that longer procedures and nonambulatory surgeries were the only factors that increased the risk of postoperative infections.

I find these studies to be strong – but not conclusive – evidence that routine preoperative antibiotics are not necessary. We need a quality randomized double-blind controlled study (and perhaps a few others to reproduce that study) to more securely prove that routine preoperative antibiotics are unnecessary. Unhealthy patients, high risk procedures, certain implants (perhaps) and longer surgeries are likely better off receiving preop antibiotics, but for the rest of the population, it is likely unnecessary.

There are 1 comments for this article

Your feedback was sent succesfully!
We promise to thoroughly investigate each issue that you bring to our attention and get back to you with the results.